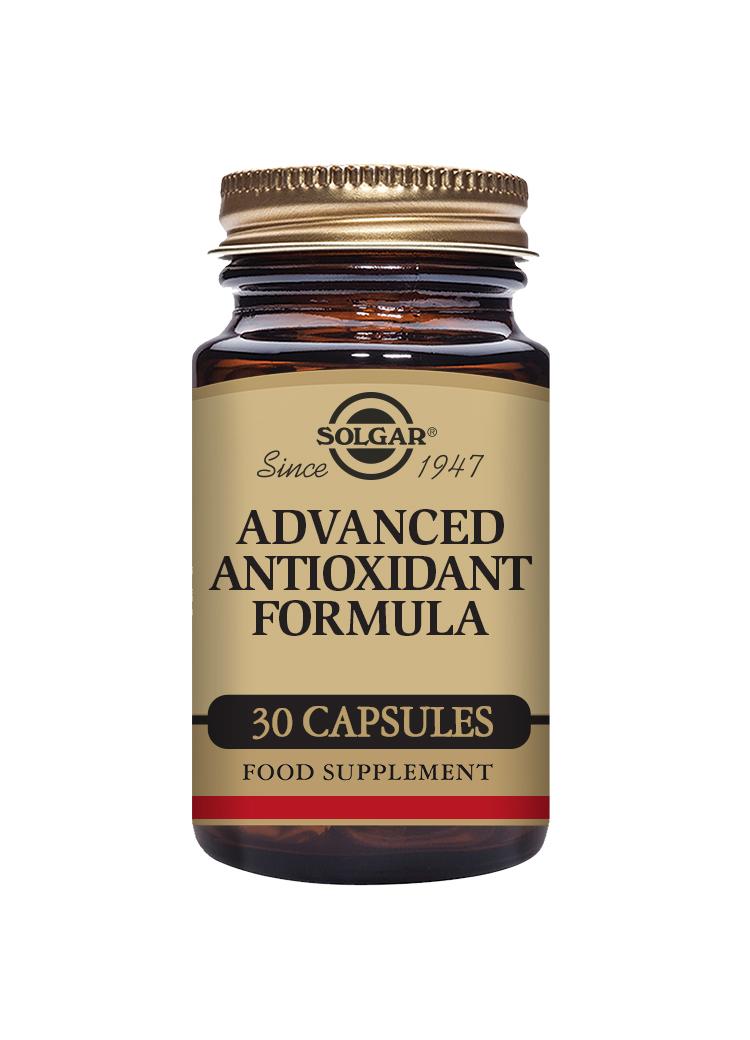 Solgar® Advanced Antioxidant Formula is an all-encompassing antioxidant formula containing several vitamins and minerals to assist in minimising the damage caused by free radicals.Free radicals are produced by the body when you breathe, digest food, exercise or even sleep. They are naturally occuring as they are created by emotional stress, ultraviolet light, radiation and air pollution. Free radicals damage the body by causing deterioration of the cells, lower the defences against diseases and putting the body into a ‘stress’ state.To counter the effect of free radicals, a balance of antioxidants is required. The most important Antioxidants include: Beta-carotene, Vitamin C, Vitamin E, Zinc, Selenium and components found in certain plants including Turmeric, and Ginkgo biloba.Antioxidants can be obtained by eating a healthy and balanced diet, but taking a supplement might be desirable to achieve an optimal intake of antioxidants.The special Solgar® Advanced Antioxidant Formula combines the vitamins C and E, with minerals such as Zinc, Selenium and Copper, all of which have strong antioxidant benefits. To create a holistic approach, several amino acids have also been included in this formula.Several food based biocompounds have been used to create this specialist formula such as Green Tea, Red Wine and Pycnogenol (a US registered trademark name for products which contain bark from the French maritime pine tree). Plant based antioxidants have been added to further strengthen the combination, using Ginkgo biloba, Spirulina and Milk thistleSolgar® Advanced Antioxidant Formula is suitable for those on a vegan diet and to be taken as 2 vegetable capsules daily, containing both vitamins and minerals, as well as amino acids.Vitamin C contributes to:The normal collagen formation for the normal function of blood vessels, bones, cartilage, gums, skin and teethThe normal energy-yielding metabolismThe normal functioning of the nervous systemThe normal psychological functionThe normal functioning of the immune system, as well as during and after intense physical exerciseThe protection of cells from oxidative stressThe reduction of tiredness and fatigueThe regeneration of the reduced form of vitamin EThe increase of iron absorptionVitamin E is a fat-soluble vitamin and an essential nutrient as it is a primary antioxidant. It also contains natural Vitamin E (d-alpha tocopherol) which in studies has shown to be 1.3 times more bioavailable than synthetic forms**.Zinc contributes to:Hair, skin and nails maintenanceCarbohydrate metabolismCognitive functionFertility and reproductionMetabolism of vitamin ATestosterone levels in the bloodVision functionImmune system functionMaintenance of normal bonesProtection of cells from oxidative stressManganese contributes to:Normal energy-yielding metabolismMaintenance of normal bonesNormal formation of connective tissueProtection of cells from oxidative stressRose hips contain bioflavonoids which naturally occur with vitamin C in nature. Bioflavonoids help to enhance the absorption and bioavailability so make sure you will receive all the benefits form Vitamin C. Tocopherol is a form of Vitamin E derived from vegetable oils and with strong antioxidant capabilities.Vitamin A contributes to:Normal iron metabolismMaintenance of normal mucous membranesMaintenance of normal skinMaintenance of normal visionNormal function of the immune systemProcess of cell specialisationSelenium contributes to:Normal spermatogenesisMaintenance of normal hairMaintenance of normal nailsNormal function of the immune systemNormal thyroid functionProtection of cells from oxidative stressCopper contributes to:Maintenance of normal connective tissuesNormal energy-yielding metabolismNormal functioning of the nervous systemNormal hair pigmentationNormal iron transport in the bodyNormal skin pigmentationNormal function of the immune systemProtection of cells from oxidative stressRiboflavin (Vitamin B2) contributes to:Normal energy-yielding metabolismNormal functioning of the nervous systemMaintenance of normal mucous membranesMaintenance of normal red blood cellsMaintenance of normal skinMaintenance of normal visionNormal metabolism of ironProtection of cells from oxidative stressReduction of tiredness and fatigueThis product also contains:Taurine is an essential amino acid as it cannot be made by the body. It is involved in various processes in the body.L-Glutathione is formed by linking of 3 amino acids, namely Glutamin Acid, Cysteine and Glycerine It plays an important role within the liver.L-Cysteine is an amino acid, bearing sulphur, which plays a role in metabolism as it assists the synthesis from fatty acids into energy. It is also involved in the synthesis of keratin, the protein found in skin, hair and nails. It can also be used to make Glutathione.Carotenoids are what produces bright yellow, red and orange colours in plants, vegetables and fruitsAll Solgar® products meet our industry recognized “Gold Standard” for excellence. Made using naturally sourced ingredients and innovating since 1947, Solgar® is your perfect supplement to good health – 98% of Solgar® consumers recommend the brand 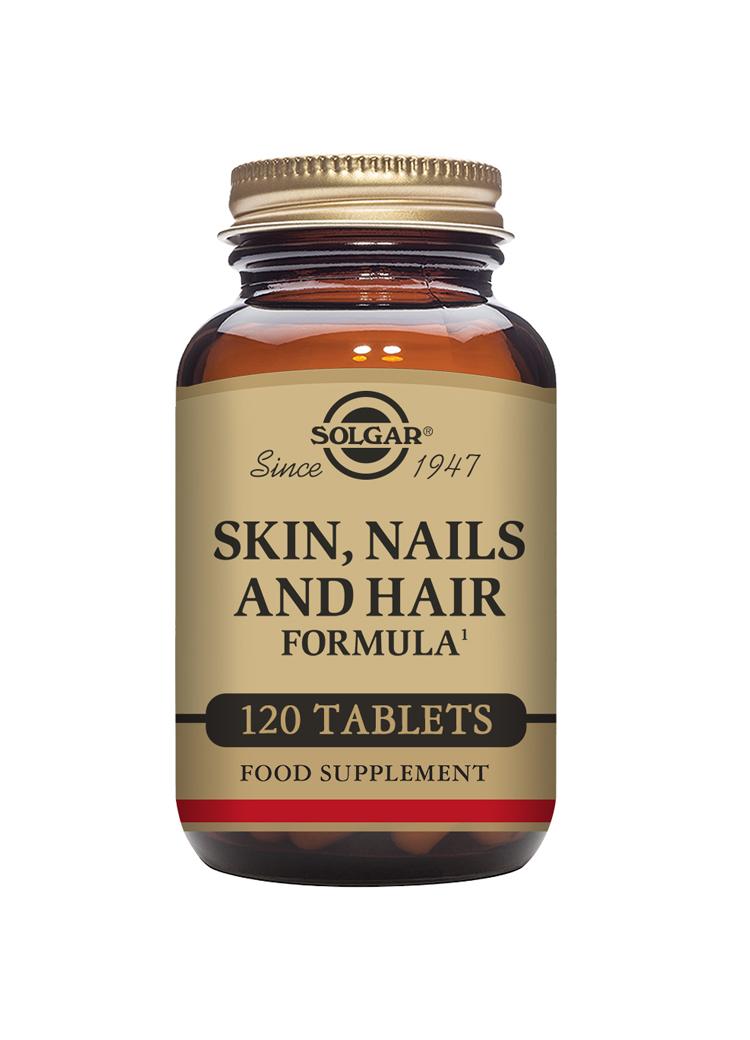 Nutritional imbalances, stress, lack of sleep and other environmental factors can affect the condition of skin, hair or nails resulting in lack-lustre appearance and condition. Help to keep your skin, nails and hair healthy with Solgar® Skin Nails & Hair Formula for an energised everyday glow. Solgar® Skin Nails & Hair is the perfect daily beauty support formula to build your beauty regime, containing zinc, copper, OptiMSM®, silica (from red algae), amino acids and vitamin C.A comprehensive formulation designed to help build collagen, a major component of skin, and also to support healthy hair and nails.Premium daily beauty support formula containing essential beauty nutrients supportive of skin, nail and hair health, including zinc, copper and vitamin CSupports a youthful glow, with vitamin C which aids in the manufacture of collagen, supporting skin structure and elasticityHelps to prevent damage to skin cells that may be linked to premature ageingSupportive of skin complexion and hair colour, as copper contributes to normal skin and hair pigmentation as well as to the protection of cells from oxidative stressAlso provides MSM, silica as red algae powder (L corallioides, silicon dioxide), and amino acids (L-Lysine and L-Proline)Vitamin C contributes to normal collagen formation for the normal function of skin, and to the protection of cells from oxidative stressZinc contributes to the maintenance of normal skin, nails and hair, and to the protection of cells from oxidative stressAll Solgar® products meet our industry recognized “Gold Standard” for excellence. Made using naturally sourced ingredients and innovating since 1947, Solgar® is your perfect supplement to good health – 98% of Solgar® consumers recommend the brand*

Nutritional imbalances, stress, lack of sleep and other environmental factors can affect the condition of skin, hair or nails resulting in lack-lustre...
£14.25
View details
X
This website uses cookies to ensure that you get the best experience on our website. Read our privacy policy.
I accept